Sixty-eight percent of likely voters oppose a national ban on abortion, according to a new Courier Newsroom/Data for Progress poll. The survey also found that 47% of likely voters said they felt “worried” about recent developments around abortion, while more than four in 10 reported feeling “angry” or “sad.”

Americans widely oppose the idea of a national ban on abortion—an idea the most powerful Republican lawmaker in the country admitted was “possible”—according to a new Courier Newsroom/Data for Progress poll.

Sixty-eight percent of likely voters across the country, including majorities of Independents and Republicans, said they oppose a national ban on abortion, with 55% saying they “strongly oppose” it. Only 24% of likely voters would support such a ban, making it a deeply unpopular idea. 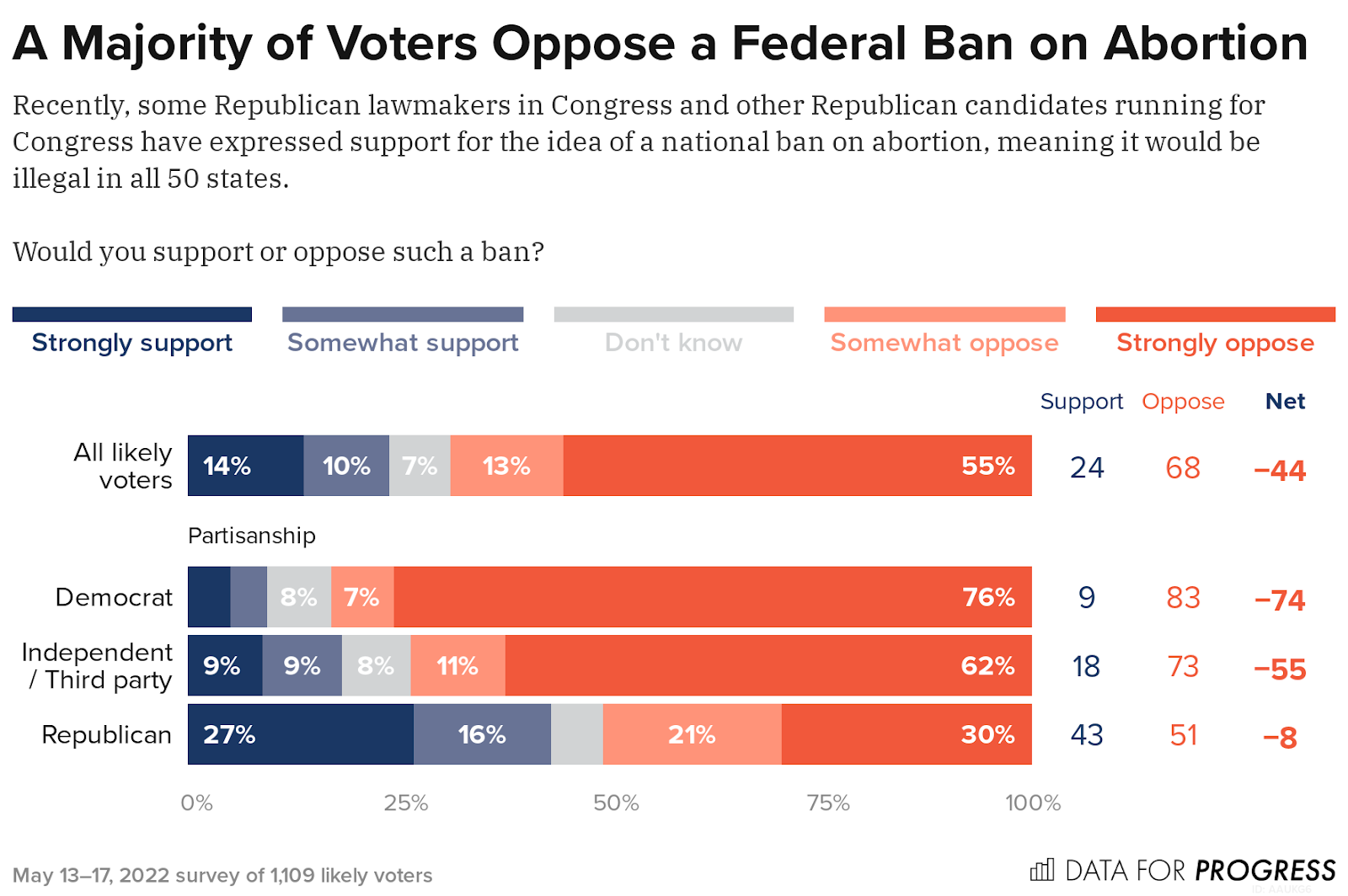 And yet, Republicans may pursue it anyway if the US Supreme Court strikes down Roe v. Wade—as a leaked draft opinion suggests they will.

If Roe were to be struck down, it would once again allow states to ban abortion. Abortion would likely remain legal in Pennsylvania, but state law does not explictly protect the right to abortion. The majority-GOP state Legislature has repeatedly pushed legislation that would limit access to abortion care. Gov. Tom Wolf’s veto pen has been the last line of defense in the fight for reproductive rights in the commonwealth.

But, as Wolf nears his term limit, the door to the governor’s house in Harrisburg is wide open.

Democratic candidate Josh Shapiro said he would veto any anti-abortion bill that came to his desk if he was elected governor.

GOP candidate Doug Mastriano introduced a bill as state senator in 2021 that would ban abortions once a fetal heartbeat is detected, roughly six weeks into a pregnancy. If he becomes the commonwealth’s next governor and the Republicans retain control of the legislature, they could try to pass a ban at any time.

Essentially, the nation would be a patchwork of 50 states with 50 different abortion laws—unless, of course, the federal government bans abortion, which is very much on the table.

“If the leaked opinion became the final opinion, legislative bodies—not only at the state level but at the federal level—certainly could legislate in that area,” McConnell said. “If this were the final decision, that was the point that it should be resolved one way or another in the legislative process. So yeah, it’s possible. It would depend on where the votes were.”

In the interview, McConnell also implicitly said it was “pretty clear where Senate Republicans stand” on abortion: they’re against it.

The most powerful anti-abortion groups have also been explicit that they plan to push for a total ban on abortion nationwide if Republicans take back control of the White House, House, and Senate in 2024. According to the Washington Post, a group of Republican Senators has even discussed introducing a bill to ban abortion at around six weeks, before many women even know they’re pregnant.

In the House, Pennsylvania Rep. Mike Kelly has introduced a six-week abortion ban that would recognize a fetus as a person with equal protections under the 14th Amendment of the US Constitution.

The Biden administration has also sought to make clear the risk that a Republican-led government could outlaw abortion.

“I think we’re at serious risk,” since-departed White House press secretary Jen Psaki said earlier this month. “Mitch McConnell and other Republicans in Congress are talking about a national ban on a woman’s right to choose.”

Democrats have also tried to pass their own bill to codify the right to abortion into federal law. The Women’s Health Protection Act would guarantee abortion access free from medically unnecessary restrictions, limitations, and bans that delay, and at times, completely obstruct, access to abortion. If the proposal were to become law, it would effectively render the Supreme Court’s decision moot and override any state laws banning or restricting abortion access, guaranteeing access to care nationwide.

The House passed the Women’s Health Protection Act earlier this year, but the bill failed in the Senate, as only 49 Senators—all Democrats, including Pennsylvania Sen. Bob Casey—voted to open debate on the legislation, far shy of the 60 votes needed. Pennsylvania’s Republican Sen. Pat Toomey voted against opening debate.

The poll also found that voters are feeling unhappy about recent developments around abortion, such as the SCOTUS leak, the possibility of a national ban and state bans on abortion that don’t include exceptions for rape or incest.

When asked to choose up to three emotions to describe how they felt about recent developments around abortion, nearly half (47%) of respondents said they felt “worried,” while more than four in 10 reported feeling “angry” or “sad.” The negative feelings were mostly reported by Democrats and independents.

Keya Vakil Keya is a reporter at COURIER, where he covers everything from healthcare to climate change. Prior to joining Courier Newsroom, Keya worked as a researcher in the film industry and dabbled in the political world.

Elections Up for Grabs: Open Seats in the State Legislature in the 2022 Election

Get exclusive Pennsylvania stories & news right in your inbox